I recently installed a rebuilt 318 and 727 in my 76 D100 2wd SWB. The truck originally had a different 318/727. My issue started with the crossmember mount not lining up with the through bolt. It is too far forward by 1/2". Initially I was thinking the whole engine/trans needed to be shifted to the rear more. Looking at the distributor cap verifies that the engine is definitely in the right location so it must be the trans mount, right? The engine mounts are in the exact same location that the original was.

I bought this Korean trans mount from Rock Auto where there are no reviews. So I went to Summit to find a different brand and I saw they also carry the Korean (Anchor brand) mount with terrible reviews. Looking at the reviews confirms that these are terrible but I didn't read any reviews with my particular bolt hole location issue.

Marching on, I called my Dad and he is sending me the original mount that came off the truck. He took the original 318/727 out of state to where he lives. I will just put a new bushing in the mount.
Sooooo, continuing, while I wait for the mount in the mail I decided to put on the trans cooler lines. What do you know, the fittings are too far forward by 1/2" too! I had to make a little bend in the cooler line to get the flare nut to be in the right position for the fitting.

I am stumped. It just seems that the tailshaft is forward 1/2" due to the mount and cooler fittings both being forward. The trans was rebuilt and in a B-body so it is a long tailshaft. To my knowledge th truck tail is the same, other than the car version having the floor shifter mounting ears. The trucks takeout 727 did not have the floor shifter ears but this current one does. I have never heard of there being two different length long tailshafts.

Anyone have knowledge of this? Is it just coincidence that the lines are long and the Korean mount is of poor quality? Is there a 1/2" difference in truck and car "long tailshafts"?
Posted By: JP8 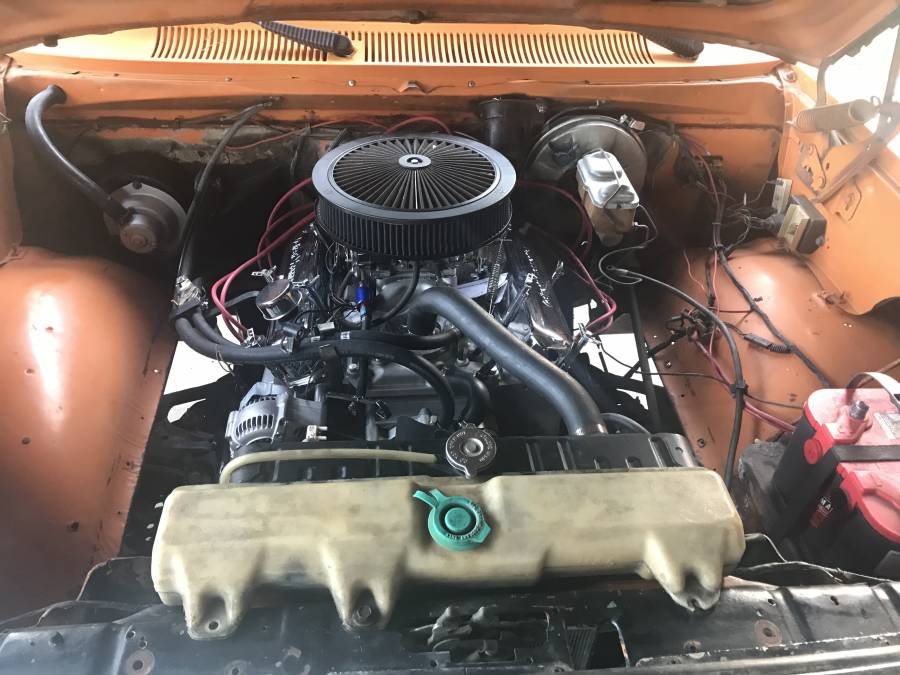 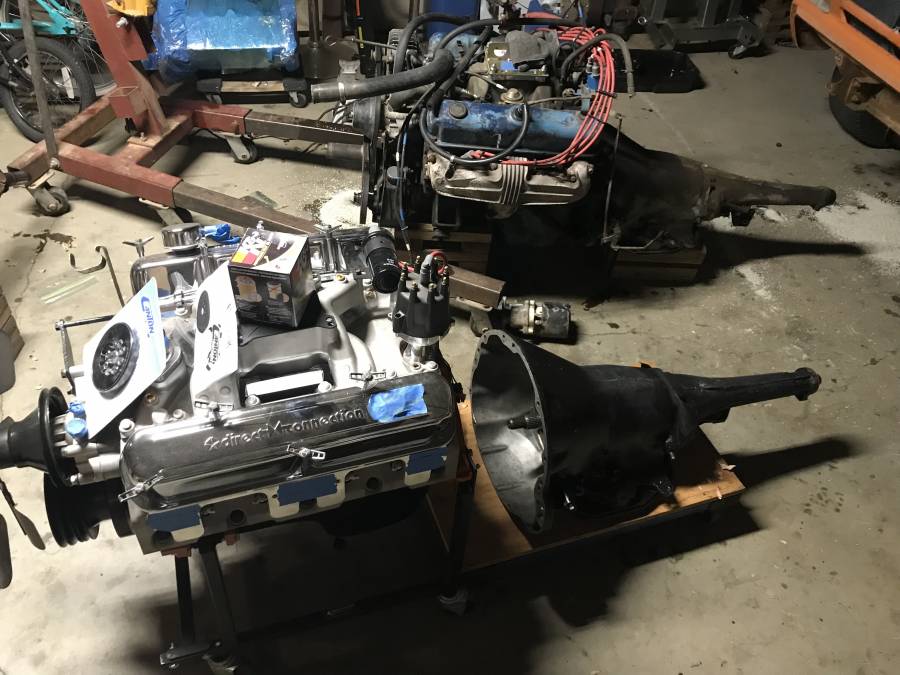 Not familiar with SB blocks but is it possible you installed the mount brackets on the wrong side of the block ears or swapped sides?
Posted By: JP8

That was my first initial thought when I was lying under the truck fiddling with the trans mount. I got up and looked in the engine bay. The truck engine mounts won’t go on the block other than how I have it AND the distributor cap is as close to the firewall as it can go.

The engine is in the right spot.
Posted By: FurryStump

The transmission mount has the metal ears on it and the one stud on the bottom? The stud is usually biased one way or the other. So you could have installed the rubber mount backwards. It is about 1/2” difference
Posted By: FurryStump

Originally Posted by JP8
That was my first initial thought when I was lying under the truck fiddling with the trans mount. I got up and looked in the engine bay. The truck engine mounts won’t go on the block other than how I have it AND the distributor cap is as close to the firewall as it can go.

The engine is in the right spot.
The engine mounting brackets go on the back side of the block ears. It is possible on earlier blocks to move them to the front of the ears, that is how I moved the engine rearward in my Duster, and with a little work you can do it on the later blocks as well. Post up some pics of your mounting brackets.
A long tailshaft is a long tailshaft, the trans mount bolt holes are all in the same place. Maybe post up some pics of the trans, mount and crossmember. Some trans mounts have elongated holes where they bolt to the tailshaft, I've seen some that don't.
I don't think distributor to firewall clearance is a good indicator as if you raise the back the clearance will increase. So exactly where the height of the tailshaft is will affect the clearance at the firewall.

See the picture.
This is not a truck mount.
Posted By: NITROUSN

Mount like this you need. Get this mount and get the front brackets in the proper place. You are to far forward so quit changing things.

Correct. This is the exact one. Rock Auto. 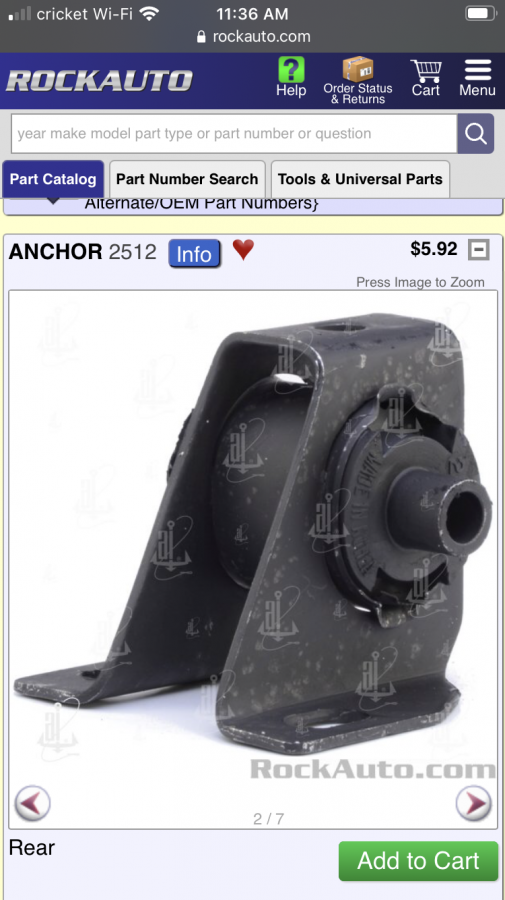 The motor needs to go back. Period. The cooler lines tell you that along with everything else. Where did you get the front brackets from? They might be the problem.
Posted By: JP8

The brackets are the same, new bushings though. The distributor is telling me the engine is in the right spot. It is a finger’s width in front of the firewall.
I’m not going to rule that out though. Need to get that original mount. Someone suggested the trans Crossmember may need to be rotated 180 degrees but it looks pretty symmetrical.
Posted By: NITROUSN 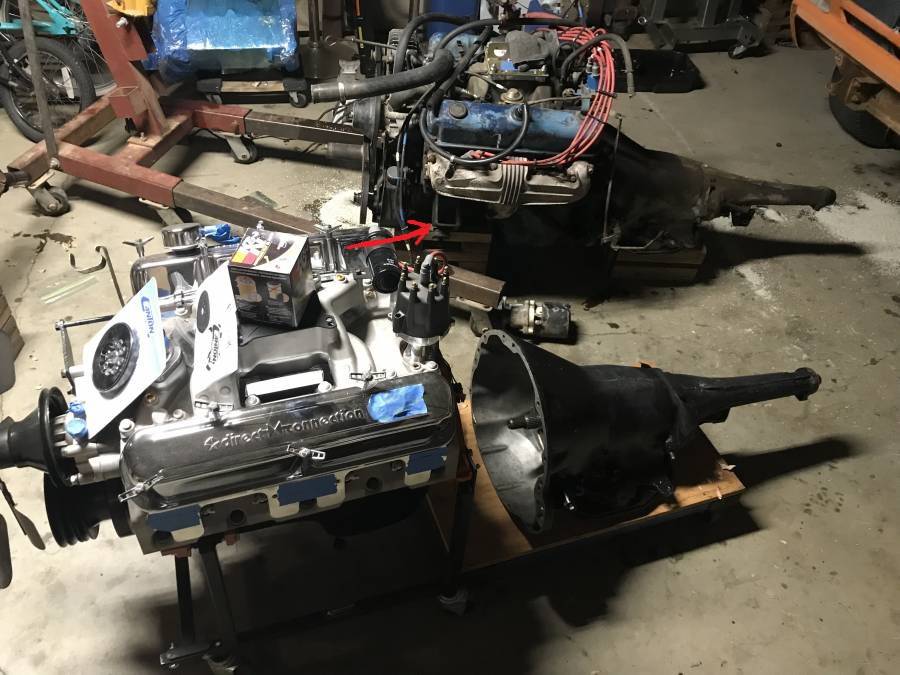 The truck brackets are labeled RR and LR. On the truck's cross member there are three locations where a engine mount can go, B/RB, /6, and LA. The engine mounts are in the correct holes in the crossmember.

Someone suggested the crossmember may need to rotate 180 degrees. I did take it out and clean it up. Perhaps it is on wrong, but just looking at it, it appears to be symmetrical from side to side. I will flip it around. When I get the original trans mount I will re-bushing it, lift the engine/ trans and bolt the trans mount in first, then lower the assembly. Hopefully the engine mounts land in the right spot.

I'm coming around to the idea that the engine could go back a bit more. The distributor is aftermarket and bigger than the original tan cap. Perhaps it is not as far back as I think it should be.
Posted By: 451Mopar

I don't know about the Magnum Engine stuff, but when I changed a 318 LA to a 360 LA, the engines' motor mount bosses were about 1/2" different on one side (I think the drivers side?)
Also the 318 lower engine to trans bracket was about 1/2" shorter too. As I recall I just used a big nut as a spacer and longer bracket to trans bolt.
On the engine mount, I think I may have had one mount (think passenger side?) mounted front to back between the frame and motor mount?
That was back around 1980 on my 1973 Power Wagon W150.
Posted By: JP8

Just so I don't leave this issue un-tied I did seem to fix this issue of the engine/trans setting back too far. I flipped the transmission crossmember around. I should have paid attention when I took it out but it did look symmetrical. When I was orientating it the right way I did notice differences , front to back. Also, the stamped part number goes on the driver's side.
Posted By: Guitar Jones

Glad you got it straightened out. I like your truck.
© 2022 Moparts Forums